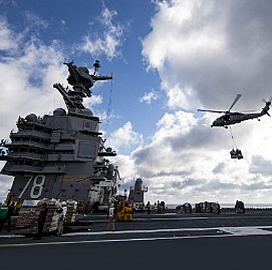 Sailors onboard the USS Gerald R. Ford wrapped up a vertical replenishment effort that involved Sikorsky-built helicopters and the USNS Joshua Humphreys tanker as part of the aircraft carrier’s post-delivery test and trials.

“Exercising and proving our ability to conduct simultaneous fueling and replenishment-at-sea increases the ship’s flexibility to respond to mission requirements as it minimizes our required time alongside a supply ship,” said  Cmdr. Carl Koch, supply officer for the CVN 78 vessel.

The PDT&T phase lasts for 18 months and seeks to operational readiness of a ship prior to mission deployment.