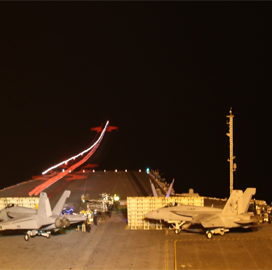 USS Ford and Carrier Air Wing Eight personnel had to conduct flight operations that involved F/A-18F and F/A-18E jets over a two-day period as part of the certification process, the military service said Monday.

The team completed 50 day traps on the first day, then conducted 70 day traps and 40 night traps the following day, surpassing the minimum requirements.

Ship crew was also required to get clearance for the vessel's precision approach landing systems in order to  secure FDC and CATCC certifications.

“All CATCC functional areas were outstanding. Additionally, the leadership and expertise exhibited by the Air Operations Officer and his staff were extremely evident throughout the course of the entire week," they wrote in the certification letter.