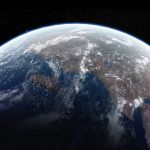 The command will support the Space Force, which was established as the sixth military branch by the Fiscal 2020 National Defense Authorization Act, USAF said Monday.

The redesignated military organization is headquartered at Vandenberg AF Base in California.