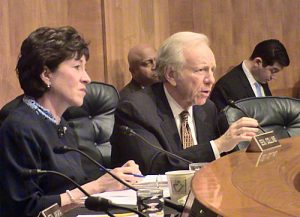 Crafted by Ranking Member Susan Collins and Sens. Joe Lieberman and Tom Carper, the Protecting Cyberspace as a National Asset Act of 2010 calls for the creation of a White House Office of Cyberspace Policy to spearhead federal and private sector efforts to secure critical cyber networks and assets. The office would be headed by a Senate-confirmed director who would be accountable to the public. The bill also creates a new center within the Department of Homeland Security to adopt  cybersecurity policies related to federal and private sector networks.

“Catastrophic cyber attack is no longer a fantasy or a fiction,” Lieberman said. “It is a clear and present danger. This legislation would fundamentally reshape the way the federal government defends America’s cyberspace. It takes a comprehensive, risk-based, and collaborative approach to addressing critical vulnerabilities in our own defenses.  We believe our bill would go a long way toward improving the security of our government and private critical infrastructure, and therefore the security of the American people.”

Collins said it is important to realize the threat of a catastrophic cyber attack is not theoretical, but very real. The sergeant at arms has reported the computer systems in executive branch agencies and in congressional agencies are now under cyber attack an average of 1.8 billion times a month, a number she called “extraordinary.”

“Cyber crime costs our national economy billions of dollars annually,” Collins said. “And intelligence officials have warned over and over again that these attacks are becoming more and more sophisticated. The fact is: We cannot fail to act. We can’t wait until there is a cyber 9/11 and say, ‘Why didn’t we act? We knew this was coming.’ The attacks are ongoing even as we meet. So we must act, and I believe we have drafted a responsible bill to do so.”

Although society has reaped enormous benefits from the use of the Internet, adversaries have identified cyberspace as an ideal 21st-century battlefield, Carper said.

“We have to take steps now to modernize our approach to protecting this valuable, but vulnerable, resource,” he said. “This legislation is a vital tool that America needs to better protect cyber space. It encourages the government and the private sector to work together to address this growing threat and provides the tools and resources for America to be successful in this critical effort.”

Report: DHS Warns of Possible Russian Cyberattack on US Amid Ukraine Tensions