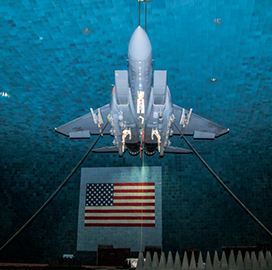 The U.S. Air Force continues to test a new electronic warfare system with the F-15E aircraft at Edwards Air Force Base in California.

“The Air Force is modernizing its F-15 fleet with the EPAWSS, which is capable of detecting, identifying, denying, degrading, disrupting and defeating modern and emerging threat systems in contested environments,” said Jon Danner, test manager of the F-15 division at Air Force Life Cycle Management Center.

“Additionally, tests must establish and provide verification of the interoperability and RF (radio frequency) compatibility among the EPAWSS, the AN/APG-82 radar and various existing avionics at the installed system level on the aircraft, as it would fly versus in a system lab,” said  Ed Sabat, project development lead and civilian director of operations of the 772nd Test Squadron.

Boeing and BAE Systems supported the test as contractors with USAF. The service branch plans to continue testing EPAWSS.