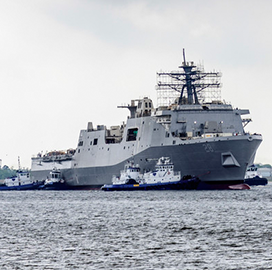 “I am thrilled to get Fort Lauderdale in the water, so we can begin final outfitting and eventually take the ship out to sea for trials,” said Capt. Scot Searles, the Navy’s program manager for the San Antonio ship class.

HII also produces other LPD ships such as the future USS Harrisburg that would support the transition to Flight II San Antonio-class vessels.