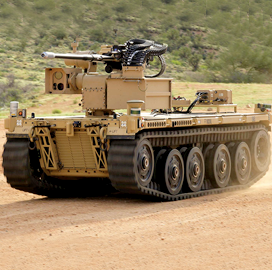 The U.S. Army plans to assess the capacity of robotic combat vehicles to operate with mission-enabling technologies demonstrator vehicles as part of a multiyear prototyping effort, National Defense Magazine reported Friday. The program’s first phase was initially slated to take place in Colorado within the March to April period.

Phase one comes after the Army announced plans to select Textron and QinetiQ’s North American arm for other transaction agreements focused on RCV development. QinetiQ will produce four light RCVs while Textron will build four of the vehicles with a medium-sized configuration.

QinetiQ also partnered with Pratt Miller to perform systems integration activities for an expeditionary modular autonomous vehicle, which has a 7,000-pound capacity and a speed of up to 30 mph.

Jon Hastie, director of unmanned systems products at QinetiQ NA, said the team intends to use government-owned autonomous technology and open-systems architectures for the EMAV effort.

Phase two of the RCV program is slated to take place in 2022 ahead of manufacturing and development activities scheduled for fiscal years 2023 through 2024.

The Army may also opt to solicit purpose-built vehicles from industry for the program’s third phase if the service decides to move forward with maturation work.