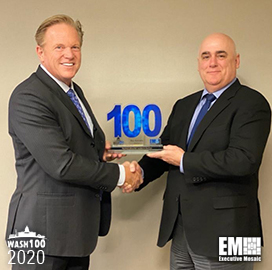 Jim Garrettson, founder and CEO of Executive Mosaic, presented Roy Azevedo, president of the space and airborne systems business at Raytheon, his first Wash100 Award as part of the 2020 selection. Executive Mosaic recognizes Azevedo for his efforts to advance defense systems and integrate modern technology into the company's infrastructure.

Executive Mosaic recognizes Azevedo for his efforts to advance defense systems and integrate modern technology into the company's infrastructure.

In October 2019, Raytheon announced that Azevedo will lead the intelligence, space and airborne systems business to be formed upon the closing of its proposed merger with United Technologies Corp. The future organization will integrate the SAS business with Raytheon's intelligence, information and services arm and commercial cybersecurity venture, Forcepoint.

Under Azevedo’s leadership, Raytheon has secured multiple contracts to grow the company and expand its portfolio, including a $386 million contract modification from the U.S. Air Force to advance Paveway laser-guided bombs in Nov. 2019.

Executive Mosaic congratulates Raytheon and Roy Azevedo for his 2020 Wash100 Award selection. His commitment to the advancement of Raytheon’s strategy and emerging technology will be integral to the GovCon sector throughout 2020.

The Wash100 Award, now in its seventh year, recognizes the most influential executives in the GovCon industry as selected by the Executive Mosaic team in tandem with online nominations from the GovCon community. Representing the best of the private and public sector, the winners demonstrate superior leadership, innovation, reliability, achievement and vision.