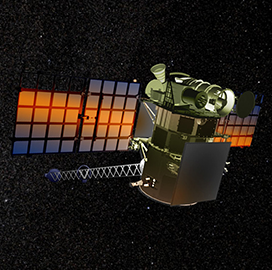 The National Oceanic and Atmospheric Administration worked with NASA to restore the Deep Space Climate Observatory or DSCOVR imagery satellite that went through some operational issues.

NOAA said Monday that it co-developed a flight software patch with NASA to address a technical glitch that had the satellite out-of-commission for approximately nine months. DSCOVR works to capture full-disk Earth images in support of cloud, vegetation and atmospheric monitoring. The satellite is also the nation's main source of real-time data on solar wind.

"Bringing DSCOVR operational again shows the unique skills and adaptability of our NOAA and NASA engineers and the care we are taking to get the maximum life from an aging asset," said Steve Volz, assistant NOAA administrator for the agency's Satellite and Information Service.