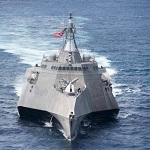 Codenamed LCS 19, the future USS St. Louis will be stationed at Naval Station Mayport in Florida and is the 10th Freedom-class littoral combat ship built by the Lockheed-led team, the Navy said Friday.

The ship will serve as the seventh naval vessel to carry the name of St. Louis, Mo., and is slated for commissioning later in the year.