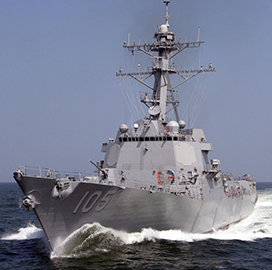 It took the NSWC team two and a half years to complete the process of turning the system from an idea to eventually performing the installation. ODIN's installation marked the initial operational deployment of a standalone suite built to operate as a dazzler.

“The Pacific Fleet Commander identified this urgent counter-intelligence, surveillance and reconnaissance need and the Chief of Naval Operations directed us to fill it as quickly as possible,” said Cmdr. David Wolfe of the Program Executive Office for Integrated Warfare Systems Directed Energy.