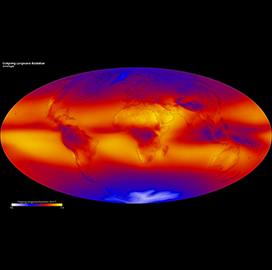 NASA plans to use a space-based instrument to sustain data gathering on the radiation balance in Earth’s atmosphere.

Libera, the new selected instrument, would generate data on absorptions, emissions, reflections and atmospheric entries of solar radiation that serves as a factor of Earth's climate, the space agency said Thursday.

The instrument gathers wavelength range data that scientists can use to study different instances of climate change.

The instrument will launch with the National Oceanic and Atmospheric Administration's Joint Polar Satellite System-3 satellite in late 2027.

“This highly innovative instrument introduces a number of new technologies such as advanced detectors that will improve the data we collect while maintaining continuity of these important radiation budget measurements,” said Sandra Cauffman, who leads NASA's Earth science division on an acting basis.