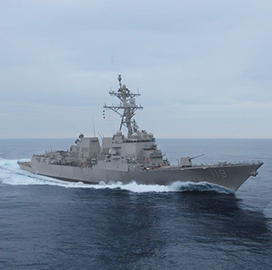 “The Navy and our dedicated shipbuilders have continued to make strides towards delivering this exceptional capability to the fleet, and performed well during builder’s trials,” said Capt. Seth Miller, who manages the Arleigh Burke ship class program.

The Navy's Board of Inspection and Survey will subject the ship to acceptance trials next month.