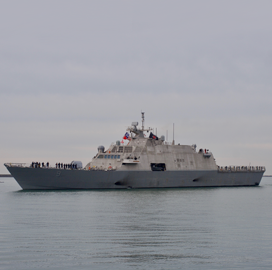 LCS-9, which is potentially slated for deployment to the U.S. 4th Fleet, will be fitted with the high-energy laser ahead of plans to begin LCS lethality and survivability modification activities starting fiscal year 2022.

He noted that directed-energy systems and laser systems could be added to vessels that don’t need a large amount of space and weight.