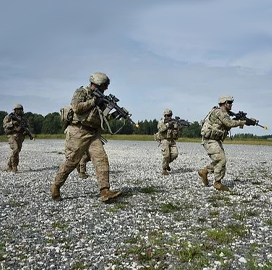 Byron Callan, an analyst for Capital Alpha Partners, said he expects a widespread deployment of surface-to-air missile interceptors and precision-guided weapons amid tensions between the U.S. and Iran, Defense One reported Friday.

Callan told investors in a note that Raytheon, Lockheed Martin, Aerojet Rocketdyne may benefit from the "immediate knee-jerk reaction" due to these companies' level of exposure in the weapons segment.

Roman Schweizer, an analyst for Cowen and Company, noted that the U.S. is likely to increase deployments to the Middle East and adds funds to the Pentagon's overseas contingency operations account in the wake of a major conflict.

The OCO account is exempt from the estimated $738B and $740B defense caps for fiscal years 2020 and 2021, respectively, according to the report.