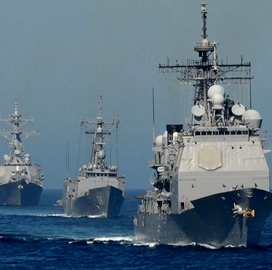 The White House has asked the U.S. Navy to propose the inclusion of unmanned surface vessels and unmanned underwater vehicles in its planned 355-ship Battle Force fleet, the War Zone reported Friday.

An Office of Management and Budget memo calls for a "legislative proposal to redefine a battleforce [sic] ship to include unmanned ships” with “clearly defined capability and performance thresholds.”

Thomas Modly, acting secretary of the Navy, said in a Dec. 6 memo that one of his top five immediate goals is coming up with an integrated plan to have 355 or more ships within 10 years for “greater global naval power.” That goal includes USVs and UUVs.

The White House’s call reflects that the Navy is looking at UUVs and USVs as a way to broaden its force structure, according to the report. The service has approximately 290 ships in its fleet and expects the number to increase to 301 by the end of fiscal 2020.