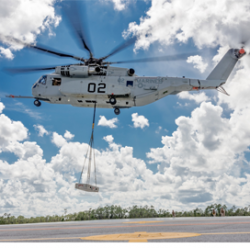 “Bringing together the tiger team exemplifies the importance and purpose of an integrated test team,” Col. Jack Perrin, PMA-261 program manager at heavy lift helicopter program office, said in a statement published Tuesday. “This was a priority for NAVAIR, industry and the Marine Corps, and the team hit it out of the park.”

CH-53K King Stallion is manufactured by Sikorsky and designed to broaden the service’s capability to rapidly transport materials. The platform is equipped with General Electric-built T-408 engines.

Members of the joint team conducted root cause analyses and came up with design models to address the causes of EGR. The team used the resulting model to build components for one of the test aircraft that was used to collect flight test data.