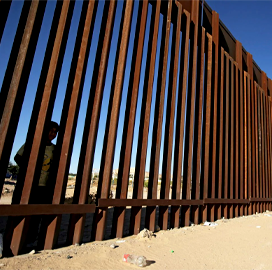 A bipartisan group of House lawmakers has introduced legislation that would require the Customs and Border Protection to deploy enhanced detection technology at land ports of entry in an effort to boost border security.

The Securing America’s Ports Act calls on the Department of Homeland Security to develop a plan to increase the scanning rates of vehicles entering the U.S. at border crossings through the use of non-intrusive inspection systems and create a timetable to implement the technology, the office of Rep. Xochitl Torres Small, D-N.M., said Monday.

The bill would also require the DHS secretary to initiate a one-year pilot program to research and develop enhancements to NII systems and enhance their use across the U.S. borders.

"By leveraging this effective technology to examine most vehicles, we help CBP officers work smarter and faster in detecting contraband while facilitating the flow of legitimate trade and travel border states depend on,” said Torres Small, a co-sponsor of the bill.

Congress approved $579M in fiscal year 2019 to bolster DHS' use of NII technology at ports of entry.