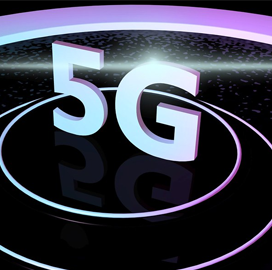 The Department of Defense is seeking additional input from the private sector to build 5G technology platforms for upcoming experimentation efforts at Naval Base San Diego in California and Joint Base Lewis-McChord in Washington.

DoD said Monday it plans to test the application of augmented and virtual reality systems supported by a fifth-generation mobile network to training, mission planning and naval warehouse operations.

Interested parties have until Dec. 23 to submit ideas in response to the department's second special notice.

The department announced the release of its initial notice on beta.SAM.gov last week to seek 5G technology development ideas for testing activities that will take place at Marine Corps Logistics Base Albany in Georgia and Hill Air Force Base in Utah.

DoD and the U.S. Army aim to create methods to facilitate 5G-supported combat training via a demonstration project at Joint Base Lewis-McChord. One of the project goals is to demonstrate how the new wireless communications technology can support transmission of distributed training to participants via AR/VR protocols, according to the notice.

The other project will take place at Naval Supply Systems Command's Fleet Logistics Center and apply a 5G networking approach to a military warehouse setting.

DoD added it will issue final requests for prototype proposals via the National Spectrum Consortium as part of an other transaction agreement.