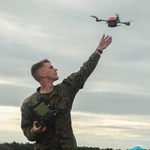 The U.S. Army equipped a platoon of 40 foot soldiers with unmanned ground vehicles and aerial drones to counter an infantry during a recent wargame, Breaking Defense reported Thursday.

“Their capabilities were awesome,” Army Capt. Philip Belanger, a Ranger Regiment and Stryker Brigade veteran, said of the drones and robots. “We reduced the risk to US forces to zero, basically, and still were able to accomplish the mission.”

The service also used artificial intelligence during the simulation. “The key technology was a platoon artificial intelligence cloud, the architecture that allowed our soldiers to be able to control robotic systems that were extending their reach within that battlespace,” said Ted Maciuba, a retired Army officer who’s now deputy director of robotic requirements at Fort Benning’s Capabilities Development and Integration Directorate.

The Army plans to develop prototypes of select technology platforms for a series of experiments in 2020. Belanger said the service will issue a request for proposals and accept offers by January.

The service will work Georgia Tech Research Institute to test and integrate the prototypes into a series of experiments in support of a “system of systems” field exercise by September.