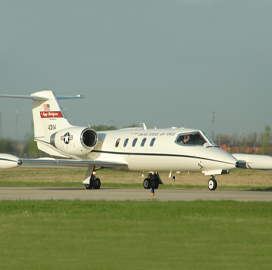 The service branch currently operates 19 of the twin turbofan-engine aircraft and plans to install an updated avionics suite including a flight management system, weather radar and an air traffic control system like ADS-B that meets Federal Aviation Administration standards.

Modernization efforts may also cover the refurbishment of the cockpit into a digital version and the installation of other features that will allow flight at higher altitudes and various landing options.

According to Maj. Kirk Schlueter, chief of standards and evaluations at the 375th Operations Group, 11 of the C-21s have begun modernization activities while eight remain slated for refurbishment by July 2020.

“Our airplane is small and nimble and can go into contested environments — degraded GPS, for example," noted  Lt. Col. Brooke Matson, commander of the 458th Airlift Squadron. "We have equipment on our aircraft that the average commercial airplane does not have, like military GPS."