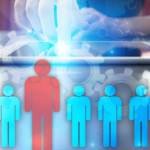 Kent said at a recent Bipartisan Policy Center event that while automation would result in reskilling initiatives for some government employees, it would also bring benefits such as fewer repetitive tasks.

“We know for a fact that we are creating more jobs in the data space, in the computational space,” she said. “We have more gaps than we can forecast that we think we’ll be able to fill.”

Kent’s comments come as Reps. Will Hurd, R-Texas, and Robin Kelly, D-Ill., work to establish a national AI strategy to ensure U.S. leadership in AI research. The strategy is slated for release in May 2020.

“We have to dramatically increase the resources devoted to research and development,” said Hurd, a fellow 2019 Wash100 Award winner. “The government should set an example in leading the way and adopting AI. This is going to save taxpayer dollars, but also make the government more efficient.”