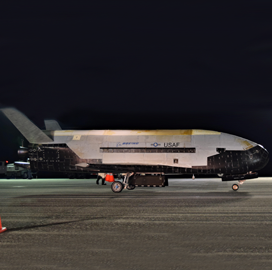 The X-37B space plane for the Orbital Test Vehicle 5 mission broke the OTV-4 mission’s spaceflight duration record in August after spending nearly 719 days in orbit. X-37B for the fifth mission launched aboard a SpaceX Falcon 9 rocket in September 2017.

“The safe return of this spacecraft, after breaking its own endurance record, is the result of the innovative partnership between Government and Industry,” said Gen. David Goldfein, Air Force chief of staff and a previous Wash100 award winner.

The space plane supports experimentation, risk reduction and development of concept of operations for reusable space vehicles. The Air Force plans to launch X-37B for the sixth mission from Cape Canaveral Air Force Station in Florida in 2020.