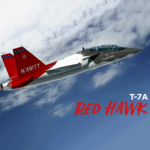 USAF intends to use the T-7A trainer as a replacement for the existing T-38C Talon aircraft. Boeing secured a $9.2B contract last year to produce T-X aircraft under a partnership with Swedish firm Saab.