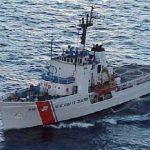 The Department of Homeland Security‘s science and technology directorate has collaborated with the U.S. Navy and the Coast Guard in the assessment of two National Security Cutters since December.

DHS said Tuesday the directorate helped the Navy’s commander of operational test and evaluation forces to collect and document information needed to evaluate potential impacts of any deficiencies identified on USCGC Hamilton and USCGC James.

Events covered at-sea tests with Coast Guard and Navy fleets over a period of more than two weeks and examined onboard command-and-control technologies and Close-In Weapons Systems, a 57-millimeter deck gun and the Over the Horizon IV and Long Range Interceptor II boats.