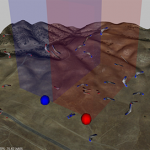 The Defense Advanced Research Projects Agency has launched a challenge that seeks to encourage military students to create and demonstrate defensive and offensive strategies for swarms of small unmanned aerial vehicles.

“It’s not just about the platforms or the links or the communications – it’s about behaviors,” said Timothy Chung, DARPA program manager and head of the challenge.

“That’s one of the key takeaways for the Service Academies Swarm Challenge: that we’re really zeroing in on swarm tactics as a battle skill,” Chung added.

At least 40 cadets and midshipmen participated in the live-fly competition that seeks to test each team’s swarm tactics for small drones.

The competition calls for each of the two teams to deploy a mixed fleet of up to 25 quad-rotor and fixed-wing UAVs in order to protect their own flag inside a battle cube with an airspace of up to 78 meters above the ground as well as earn scores in three ways in two battle rounds.

These ways include air-to-air “tags” through the use of a virtual weapon to target a sensor on a rival’s in-flight drone, air-to-ground tags through physical drone landing on the competitor’s ground-based flag as well as swarm logistics performance.