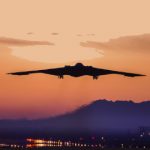 Kris Osborn writes the B-2 defensive management system has been updated to help  sustain the bomber’s stealth functions and increase defense against new threats.

The report said the DMS-M program obtained authorization last year to move into the engineering manufacturing and development phase of the acquisition process.

Hertzog added three aircraft will be updated to complete the EMD phase and the program is scheduled to enter full rate production in 2019, according to the report.

The service branch expects to spend nearly $1.84 billion to build four B-2 DMS-M units and looks to invest $832 million to procure an additional 16 units, Osborn wrote.

The Air Force will fly B-2 aircraft alongside the B-21 Raider stealth bomber, which is scheduled to enter service by the mid-2020s.