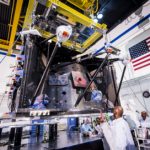 Jeff Foust writes JWST officials said at a town hall meeting that one call for proposals is for astronomers that helped develop Webb telescope’s components while the other is for “early release” observations that all astronomers can propose.

NASA will also release a general call for proposals for the telescope’s first year of observations in late 2017, Foust reported.

Eric Smith, JWST program director at NASA, said the agency looks to resume vibration testing on the space observatory later this month after an anomaly caused the test to shut down in December, the report stated.

Smith noted the telescope optics and instruments will be delivered to Johnson Space Center in April to undergo tests in a thermal vacuum chamber then Northrop Grumman will integrate those components with the spacecraft bus and sunshade in October, Foust wrote.