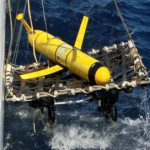 The U.S. Navy deploys unmanned underwater vehicles, also known as ocean gliders, to explore the world’s oceans for up to four months in order to help predict sea currents, tides and density as well as collect information on ocean salinity, depth and temperature.

Rear Adm. Tim Gallaudet, oceanographer and chief of the Naval Meterology and Oceanography Command, wrote in a blog post published Dec. 19 that the Navy transmits collected data from the Teledyne Webb-built undersea drones to the Naval Oceanographic Office at Stennis Space Center in Mississippi for integration with NAVOCEANO’s ocean models.

NAVOCEANO has used a fleet of underwater drones since 2012 as part of the Navy’s Littoral Battlespace Sensing-Gliders program.

“These models improve with glider data, which we share with regional partners to help their understanding of the environment,” he added.

The Navy retrieved a week ago an underwater drone that China’s naval forces seized on Dec. 15 in international waters around the South China Sea.