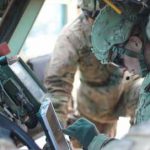 The U.S. Marine Corps will integrate a new target handoff system into off-the-shelf tablets from Samsung to call in fire support from air, ground and sea units, Military.com reported Wednesday.

The Marine Corps previously said it would acquire smartphones for fiscal year 2017 in an effort to boost the service branch’s fire support, mobility and tactical capacity.

“Currently we are working with other program offices within Systems Command to build upon the initial fielding of the Target Handoff System,” Hume said.