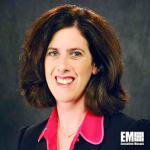 Lisa Blumerman has served as associate director for decennial census programs at the U.S. Census Bureau since March 2015.

In this capacity, she provides executive leadership and direction for the bureau’s American Community Survey, geographic programs and the 2020 Census.

The 19-year bureau veteran also held the roles of assistant associate director for decennial census and chief of its government division, where she led data collection efforts and  managed the census of federal, state and local agencies as well as the 25 annual and quarterly surveys that examine government activity.

She also worked in various other leadership positions at the bureau, including service as chief of the customer liaison and marketing services office, deputy chief of the American community survey office, administrative records coordinator in the policy office, chief of the population estimates branch and assistant associate director for decennial census.

Before she joined the bureau in 1997, Blumerman was a senior analyst at the American Public Welfare Association.

She received an Arthur S. Flemming Award and a silver and bronze medal from the Commerce Department in recognition of her service in the federal government.