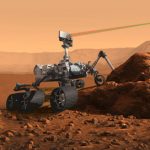 NASA officials estimate the development and launch of the proposed Mars 2020 rover mission will cost approximately $2.1 billion and that mission operations will be worth around $300 million, Space News reported Wednesday.

Jeff Foust writes both cost estimates lie at the confidence level of 70 percent and are higher than the initial cost estimate of $1.5 billion when plans for the mission were announced in 2012.

“Our confirmed cost today, in real year dollars, of $2.1 billion for development and launch and $300 million for prime mission operations remains consistent with the scope and cost approved at the start of the project,” Tahu added.

The space agency also announced Friday that the Mars 2020 rover will now move into the design and construction phase after the space vehicle passed the Key Decision Point C development milestone, Foust reports.

The report said NASA plans to launch the rover by mid-2020 and expects the spacecraft to reach Mars by February 2021 to gather and bring Martian soil and rock samples to Earth.