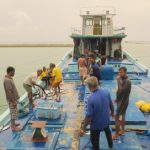 The U.S. Army Corps of Engineers — on behalf of the U.S. Pacific Command — has partnered with Maldives’ defense force and environmental protection agency to develop an Environmental Sensitivity Index atlas for Laamu Atoll.

The Army said Wednesday ESI maps aim to detail coastal resources that could be affected by an oil spill including birds, fish, shorelines, marshes, tidal flats and human-use resources.

USACE and the Maldives government worked on the Laamu Atoll project for approximately 15 months, the Army said.

The efforts resulted to an interactive electronic atlas, hardcopy maps and a GIS database that would be used by Maldives’ coast guard and EPA, the Army added.

Hundreds of oil tankers cross the Laamu Atoll to deliver cargo between Africa and Asia every year.