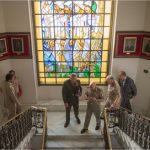 The chairman of the Joint Chiefs of Staff has said the U.S. military should address the emergence of cyber, space and ballistic intercontinental missiles as factors that changed the “character” of war, DoD News reported Sunday.

Dunford also noted that there are certain areas in which the defense secretary can delegate responsibility for joint integration to the CJCS.

The defense secretary holds responsibility for joint integration and the authorities to integrate the combatant commands under the current system, the report said.