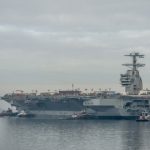 Sydney Freedberg Jr. writes that report author Jerry Hendrix believes programs such as the Ford-class aircraft carrier and F-35C fighter jet could build on a “strategic mistake” in the aftermath of the Cold War when the Navy shifted investments to short-range capabilities.

Hendrix, director of the defense strategies and assessments program at CNAS, told Breaking Defense that a cheaper program for aircraft carriers is possible and that the Navy should reinvest in long-range unmanned aircraft.

He also told the publication that while the Ford-class carrier is designed to generate 160 sorties a day compared to the 120 sorties for a Nimitz-class carrier, the short-range aircraft on the Ford may not match the requirements in an anti-access/area denial environment.