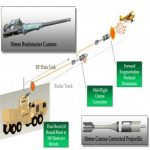 Researchers at the Army Research, Development and Engineering Center used the Extended Area Protection and Survivability platform to target two outlaw-class drones at approximately 1500 meters during the final tests of the system at Yuma Proving Ground in Arizona on Aug. 19, Edward Lopez wrote.

EAPS works to carry out warhead detonation against hostile drones and other aerial threats through the communication of assessment data to the ground station and computation of the trajectory course for interceptors.

The warhead on EAPS has steel-body fragments designed to hit enemy drones and a tantalum-tungsten alloy liner against mortars, artillery and rockets, Lopez reports.