The United States Marine Corps ranking system offers Marines important information. Understanding the Marine Corps ranks might help you succeed or better comprehend a veteran’s experience. If you choose a military career, you can advance through numerous levels.

Marine Corps ranks define responsibility and authority. Each rank has a pay grade. Here is the complete and in-order list of U.S. Marine Corps Ranks. 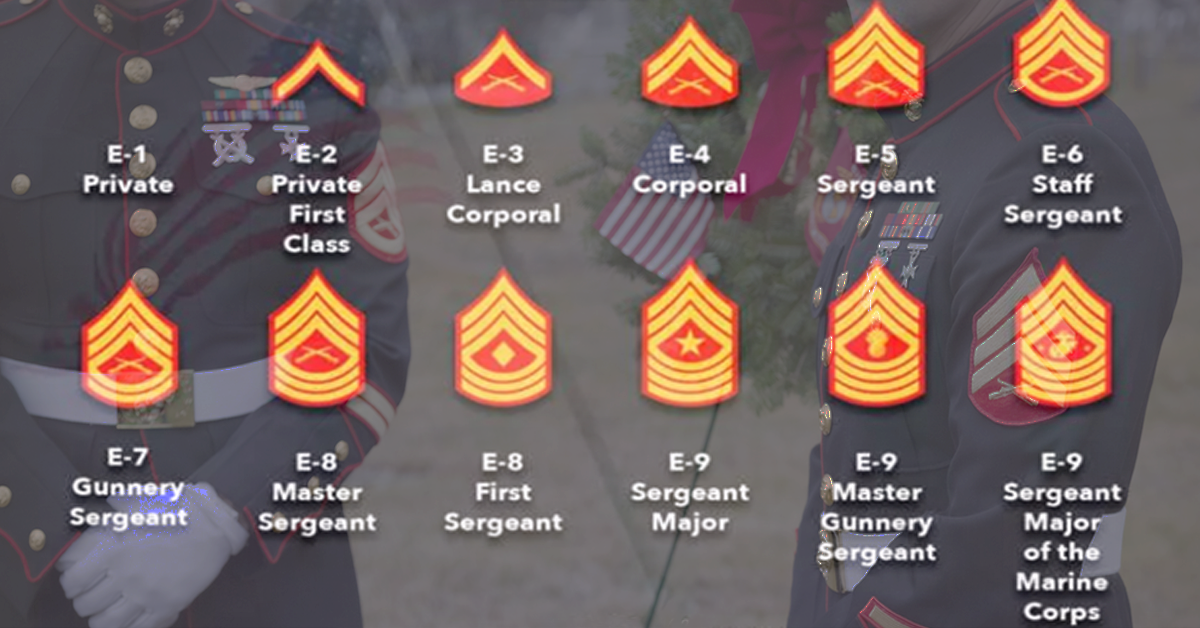 Junior Enlisted Marines have recently enlisted, working to hone their abilities and establish their principles. These are the first three enlisted ranks in the United States Marine Corps, with most Marines reaching the rank of Private First Class by the time they leave the Marines.

Young Marines who complete basic training are promoted to private (E-1) rank. The average enlisted marine spends six months as a private before being promoted to the next grade. An individual’s role as a private in the Marine Corps is to learn the ropes and the commands. Most of the time, the senior enlisted marine or marines with higher positions will instruct the private on what to do.

After six months of service, company commanders can elevate E-1 privates to E-2 PFC. There will be an automatic promotion for those who match the fundamental promotion criteria.

The second rank for people who join the Marine Corps is Private First Class. In 1917, Marine Corps created the rank of PFC to match a similar position to the Army.

Company commanders promote all active-duty privates after this service period if they match basic standards. PFC spent most of their time doing chores and studying.

The first step toward becoming an essential part of the Marine Corps is getting promoted to Private First Class. The PFCs are what hold the Marines together. The PFC’s job is to use their technical skills and learn and develop new skills.

The Marine Corps’ third enlisted rank is that of Lance Corporal (E-3). During the Indian Wars in the 1830s, the Marines first adopted the rank of lance corporal (LCpl).

The position of Lance Corporal is the next level in your Marine Corps career. As well as acquiring and developing leadership qualities, lance corporals keep applying the knowledge and abilities they gained throughout their formal education.

Lance corporals will focus on self-education and ancillary duties to advance. They should also show leadership to get a higher-ranking position. Some Marines never move past E-3 due to the competitive nature of the higher grades. 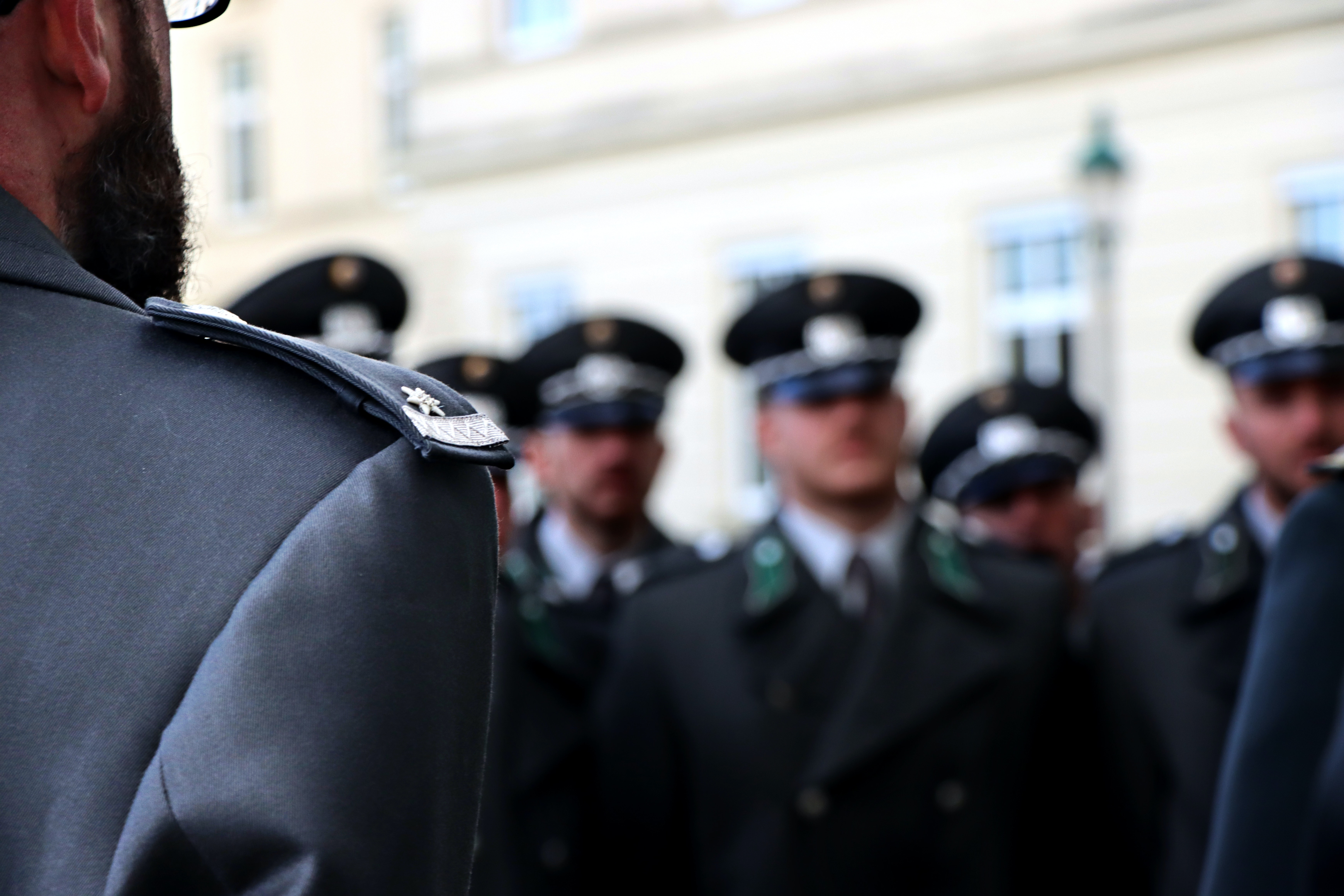 Marine corporals and sergeants have a specific role. Non-Commissioned Officers or NCOs are responsible for their men in combat and out. They indicate duty and dedication to the mission.

The lowest NCO rank is a corporal (E-4) who leads junior Marines. Corporals must show more maturity, leadership, and professionalism. The corporal’s development as a small unit leader and professional talents affect mission effectiveness in battle.

Being promoted to the Noncommissioned Officer requires that a Corporal prove their competence. They must achieve primary eligibility conditions and compete in a Marine Corps-wide. The Composite Score competition will help promote only the most competent candidates to the next higher grade; corporal to sergeant.

The sergeant (E-5) position in the Marine Corps has almost the same tasks and obligations as corporal rank in the Army. No matter what NCO level one holds, one’s primary obligations and duties will always be the same. The primary distinction between a sergeant and a corporal is in the sergeant’s responsibility for a more significant number of Marines and a greater quantity of equipment and other property.

Marine Corps Sergeants demonstrate increasingly responsible and mature behavior. Sergents’ leadership and expertise are crucial to the success of the overall operation.

Twenty-four months TIS and 12 months TIG is required for sergeant. To promote from corporal to sergeant, you must compete in the Marine Corps-wide Composite Score. It ensures that only the best Marines advance. Sergeants oversee more Marines, equipment, and property than corporals. 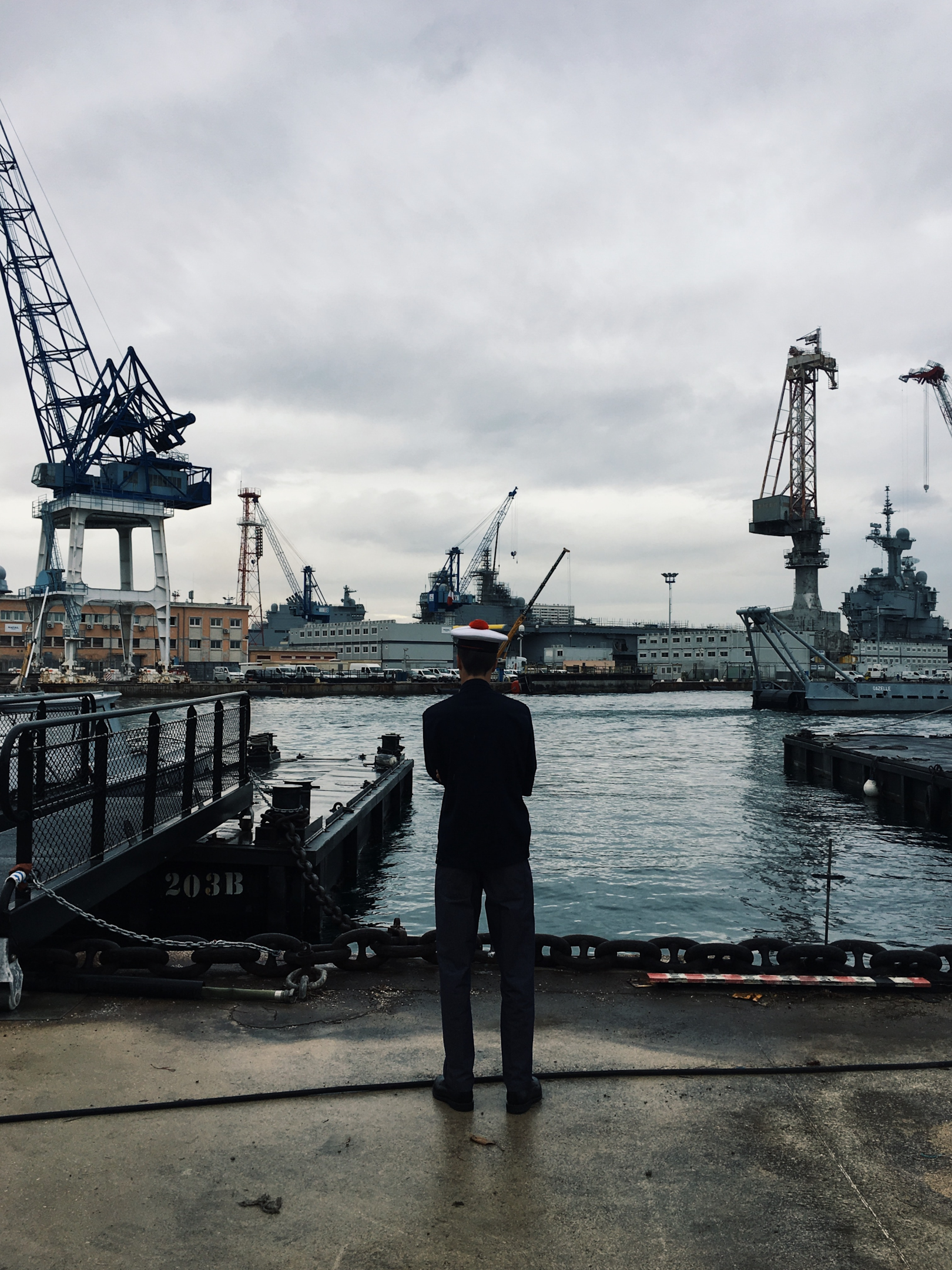 A yearly meeting of a centralized selection board decides who gets promoted to staff noncommissioned officer. The United States Marine Corps board carefully considers each application when promoting.

Staff sergeants usually supervise one or more sergeants. SSgts are accountable for their sergeants and all Marines in their section, squad, or team.

The staff sergeant requires four years of TIS and 24 months of TIG. Staff sergeants usually lead 40-50 Marines and one or more sergeants. Drill teachers are needed.

The Marine Corps gunnery sergeant rank is the backbone of the SNCO ranks. Gunnery sergeants in the Marine Corps use their extensive knowledge and training to make fair judgments quickly that benefit both the mission and their Marines. When it comes to leadership and professionalism, GySgts are the ones whose actions their subordinates follow.

A Marine needs six years of TIS and three years of TIG to be a gunnery sergeant. Gunnery sergeants often work with individual companies, although they also may be assigned to battalions, training units, and recruitment stations. Training, overseeing, disciplining subordinates, fostering the growth of other Marines, and upholding all military standards are part of a gunnery sergeant’s purview.

Here are the activities and tasks of a Gunnery Sergeant:

The master sergeant and first sergeant share the ninth USMC rank. Eight years TIS and four years TIG are required for either position.

Master sergeants are battalion, regiment, and brigade technical managers. The master sergeant is a  Military Occupational Specialties (MOS) expert and independent. This person advises majors and lieutenants colonels on equipment and programs and offers technical, tactical, and administrative support.

The first sergeant is a consultant to the commander on matters involving people rather than hardware. At the company level, the first sergeant acts as the central and captain’s chief adviser, supplying them with intelligence on their troops’ readiness.

A master gunnery sergeant acts as a technical manager at the battalion level or higher. This individual possesses exceptional MOS competency and a track record of leading and supervising others.

The sergeant major is the Marine Corps’ top enlisted adviser. Their primary and foremost requirement is outstanding leadership and an exceptionally high degree of professional competence. E-9 marines must also be able to act independently in the role of principal enlisted assistant to the commander in all organization’s administrative, technical, and tactical requirements.

The sergeant major is the Marine Corps’ top counselor. This person is in charge of overseeing the personnel operations of a battalion or larger unit. They advise officers of all grades on readiness for their respective departments.

The duties for each of these jobs are different, yet they receive the same salary. Master Gunnery Sergeant and Sergeant Major require ten years of TIS and three years of TIG. 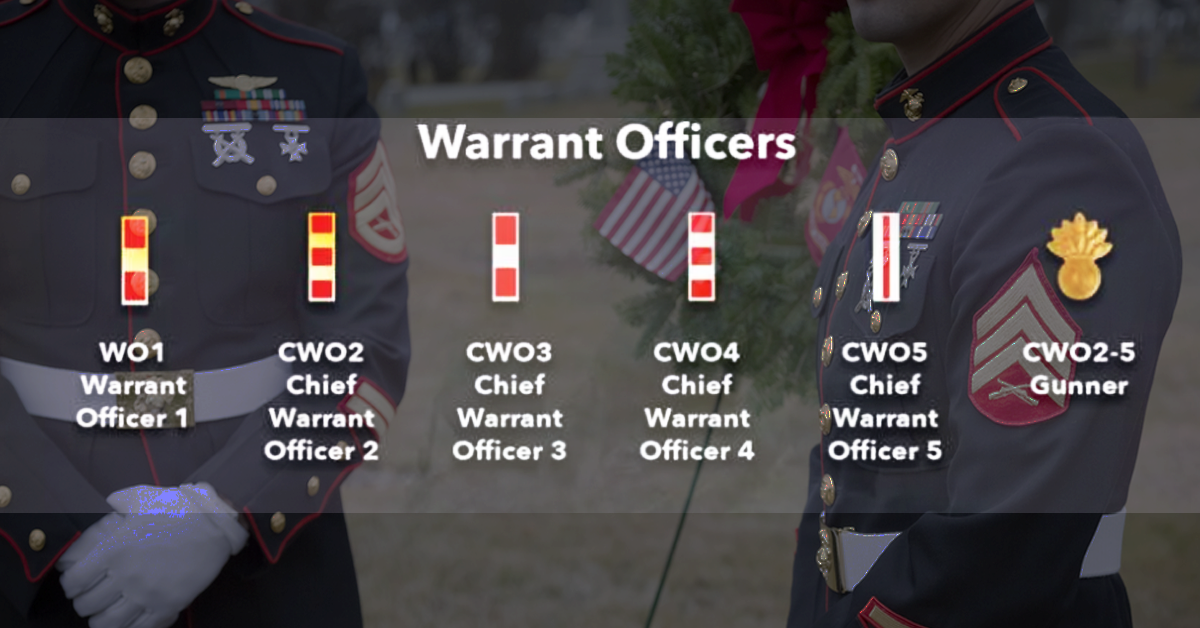 The Marine Corps warrant officers are subject matter experts who serve as role models and teachers to their fellow enlisted men and women. The appointment of a sergeant (E-5) or noncommissioned staff officer (E-6) to the rank of warrant officer requires the approval of the secretary of the Navy. Chief Warrant Officer 2 is the first step toward a commission for a warrant officer. However, until then, they will likely function as technical consultants for higher-ups.

Marines under the command of a chief warrant officer get guidance and instruction in their specialty. Warrants for sergeants or staff noncommissioned officers to advance to warrant officer rank require approval from the secretary of the Navy. Infantry weapons officers can be warrant officers as well. As a result of this accomplishment, they are now considered Marine gunners. 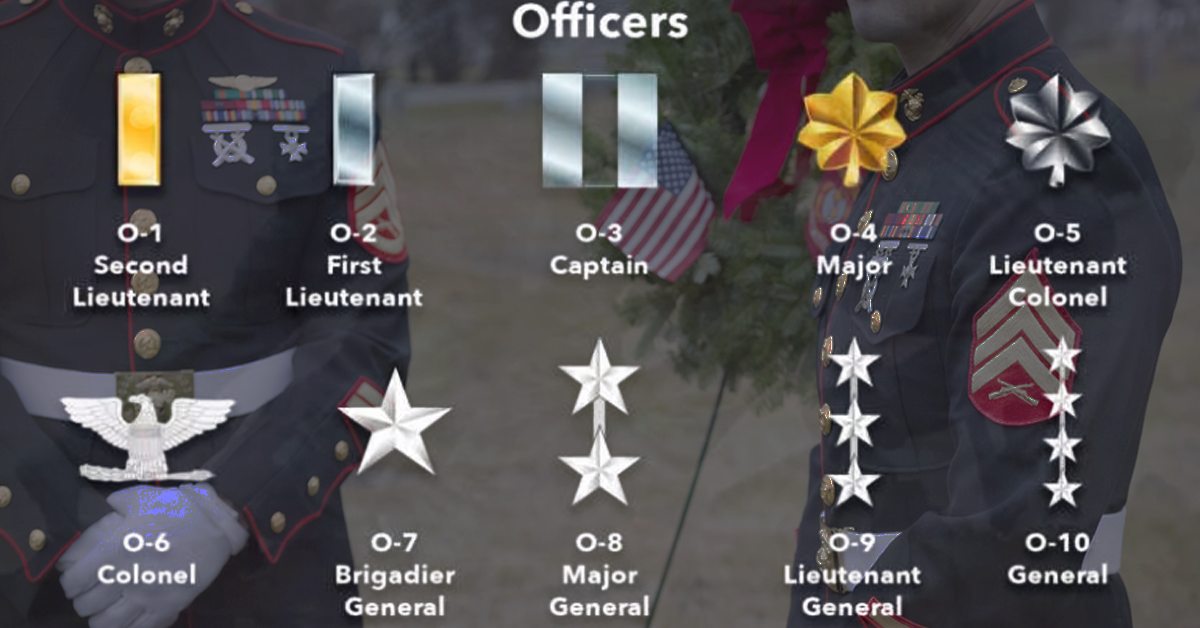 Officers with commissions are university grads who have received and accepted a presidential appointment. Their rank and commission make them responsible for guiding Marines in protecting American freedoms and liberties. Commission officers can advance to higher levels, such as general, field, or company officers. Both the Marine Corps Commandant and the Marine Corps Assistant Commandant hold the rank of four stars.

Officers with commissions are university grads who have received a presidential appointment. First, they have to finish The Basic School, and then they can move on to MOS training. Even though they have a college degree and command over enlisted personnel, they still need to consult with noncommissioned officers because they lack military experience.

The responsibilities of a second lieutenant are those of a platoon leader or company commander, and they defer to the authority of their superiors.

The duties of a first lieutenant are comparable to those of a second lieutenant. However, the latter’s responsibilities are expanded immediately upon promotion.

A Captain is the senior commissioned officer in a Marine Corps company and acts as the commander of that unit. Its duties include supervising its members and directing their efforts in carrying out tactical missions with the assistance of senior noncommissioned officers.

A Marine Major is typically assigned duties such as an executive officer of a battalion, leader of a weapons company, or member of the staff of a regiment or brigade.

Lieutenant Colonel commands a regiment, heads up a brigade, or works on a division’s staff.

A colonel leads a regiment, heads up a brigade, or works on a division’s staff.

Brigadier Generals are one-star generals nominated by the President and require Senate confirmation to take office.

A Major General is a two-star General, which the President and subject also nominate for Senate confirmation.

A Lieutenant General is a three-star general nominated by the President and requires Senate confirmation to take office.

A four-star general is the highest ranking officer in the United States armed forces. The President also appoints the General and requires Senate confirmation to take office.

Assistant Commandant Of The Marine Corps

The second-highest ranked Marine Officer is the Assistant Commandant of the Marine Corps, a four-star general who acts as the Commandant’s deputy.

Commandant Of The Marine Corps

In the Joint Chiefs of Staff sits the highest-ranking Marine Officer, the Commandant Of The Marine Corps, who is also a four-star general.

Check here the ranks of the other military branches:

What Are the U.S. Air Force Ranks?