The United States federal budget deficit has been a hot topic for several years, especially during election cycles and economic indicators dip. The Congressional Budget Office projected that this year’s deficit would shrink to $1 trillion from approximately $3.1 million in 2020 as COVID-19 brought a decline in revenues and a continued rise in spending. This article explains the differences between a federal budget deficit and a federal government debt, as well as factors and potential solutions. Read on!

What is the difference between debt and deficit?

A budget deficit happens when a country, business, or individual spends more than its revenue for a specific period. It can determine the entity’s overall financial health. On the other hand, debt is the total amount of money owned and doesn’t necessarily indicate a weak economy.

What is the difference between the federal budget deficit and federal government debt? 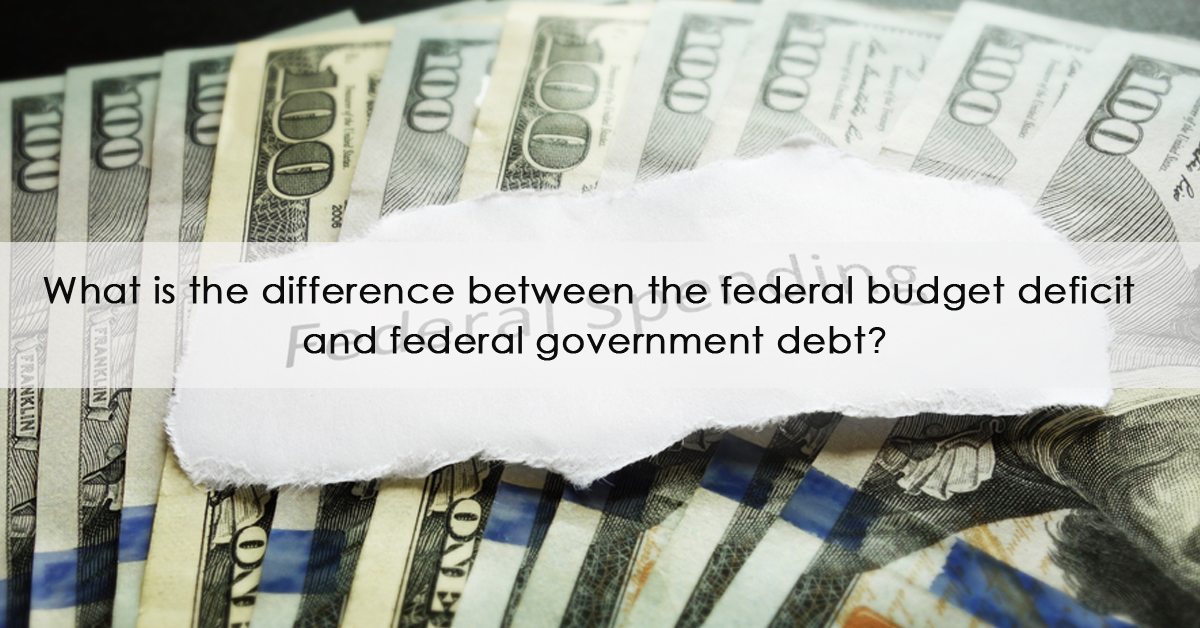 Federal debt comes from the government’s borrowed money from the Federal Reserve bank to settle for its budget deficit if insufficient amounts of taxes are collected. In addition, it’s the accumulated amount of money that it owes from its creditors from running budget deficits. (Running deficits means the government spends money without raising taxes to pay for additional spending but by borrowing money.)

What is the connection between the federal budget deficit and the national debt? 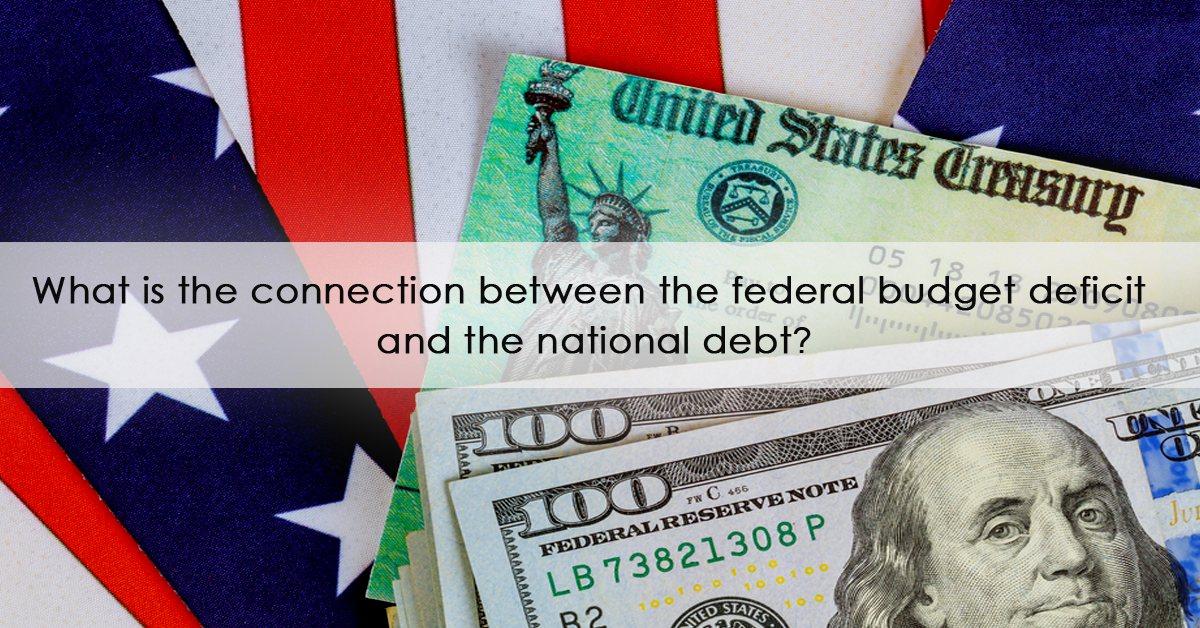 Ways the budget deficit can affect the national debt

Ways the national debt can affect the budget deficit

In February 2022, the gross national debt reached $30 trillion. It can be problematic because it leads to higher interest rates and inflation. If the debt grows faster than the GDP, the debt to GDP ratio may dramatically increase, which can destabilize the economy an economic growth indicator. Here are other ways the national debt can affect the deficit:

1. The interest rates from borrowed money and treasury bills, notes, and bonds add to each year’s deficit.

2. Debts decrease tax revenue, further increasing the deficit. This may alert creditors on how the U.S. government can repay them, leading them to demand higher interest rates to outweigh the perceived risks, slowing down economic growth.

3. Federal debt indicates each year’s true deficit. Each year’s debt can be more accurately gauged by comparing the current year’s debt to the previous debts. Payments for the debt interest are equivalent to 1.7% of the GDP. In the fiscal year 2019, it reached $575 billion.

Was there a time the federal government’s budget was in surplus?

Next, there were budget surpluses from Social Security benefits, further growing funds. This was because more senior citizens were working than retirees pulling retirement benefits. As the senior population grew over time, there was a need for more younger workers to compensate for senior benefits by paying taxes.

Furthermore, an increase in federal tax collections was observed in late 1990. This powerful economic growth initiated the rise in taxes, where:

In addition, total government spending on transfer payments, including welfare, food stamps, and unemployment benefits, declined as the employment rate surged. Even experienced budget analysts did not expect the sudden decrease in transfer payments and increase in expenditures, surprising everyone with budget surpluses. It was then cut short when everything started to get out of hand. Tax revenues sagged when the recession began in March 2000, declining revenues.

What affects federal deficits in the budget?

In recent years, Congress hasn’t been able to achieve a balanced budget because it failed to address issues such as entitlement spending, which accounts for two-thirds of the total federal spending and threatens to overwhelm other areas of government spending. This includes rising health care costs (Social security and medicare) and an aging population that continues to consume more resources as baby boomers age into retirement. Here are other factors affecting such deficits:

Lower tax rates are included in the fiscal policy where the government seeks to promote economic growth. Tax cuts boost the economy as there is more money circulating.

However, low levels of taxation might not cover government expenditures, result in revenue declines, and end up in deficits. Simply put, tax cuts favor the economy in the short term. In the long term, tax cuts depress the economy by causing a shortage in federal spending.

The Tax Cuts and Jobs Act is a major federal tax overhaul signed into law by President Donal Trump in December 2017 and became effective in January 2018. The bill reduces the statutory tax rates at all taxable income levels, lowers the top corporate income tax rates from 35 to 21%, and repeals the estate tax by over $5.5 million for single-people estates and over $11 million for married couples.

In 2019, U.S. military spending increased to $732 billion, approximately a 7% increase from 2018. Before the pandemic, national defense expenditures significantly contributed to the annual budget deficits, amounting to about half of the discretionary spending. It started with the War on Terrorism and other related military spending that added trillions to the country’s debt since 2001. This includes budget increases to the following federal agency departments:

Social Security, Medicaid, and Medicare are the largest part of mandatory spending. Health programs comprise 51% of federal spending. The most expensive among them was Medicaid, where the government spent $622 billion in the fiscal year 2020. Note that Social Security is not a factor because it’s funded through payroll tax deductions and the Social Security trust fund.

In addition, the budget for mandatory spending includes other welfare programs, such as unemployment compensation, student loans, retirement programs for federal employees, and housing assistance.

Government budgets were affected as the government faced huge fiscal challenges to cope with the COVID-19 pandemic. The pandemic made more people eligible for social benefits like unemployment insurance and Medicaid, prompting the government to boost spending in these areas.

Congress also passed several laws in March and April 2020. Some of which were the Health care enhancement act and the paycheck protection program, which cost over $480 million for testing, hospitals, and small businesses. Another is the Coronavirus Preparedness and Response Supplemental Appropriations Act which provided $8.3 billion to federal agencies in response to the pandemic.

How can the federal government address the national debt?

The American government has a long debt history and will continue to borrow money unless significant changes are made within the economy or spending habits as a nation. Here are some ways the government can address the national debt:

An excellent way to manage the national debt is by raising taxes, especially for wealthy Americans and corporations. However, if the government is going to raise taxes for these people, it should also find ways to reduce tax credits and deductions. Raising taxes on high-income earners can also further stabilize Social Security funds.

The U.S. spends the most on its military than any other country. There were calls for cuts of as much as $200 billion even before the pandemic. While many people feel that reducing military spending would be detrimental to national security, others see it as an opportunity for savings that can be used elsewhere within the government.

Many programs don’t work well at all. Their continued operations only contribute to the overall national debt by draining funds from other areas of the government that could potentially help solve more pressing problems like the national debt. In fact, 62% of the total programs were not subject to regular budget review from the $4.4 trillion overall spending in 2019.

The government can eliminate programs or agencies that cost millions of taxpayer dollars, such as the Economic Development Administration, which is a duplicate of the 62 other community development programs. The agency spent about $350 million in 1997 to grow the economy. However, GAO had many key arguments favoring the agency’s elimination that could save up to $3.5 billion taxpayer dollars in five years.

Whether for mandatory programs, retirement plans, or student loans, the federal government will one day be able to prevent unwanted debts and accurately predict enormous deficits through longer-term budget forecasts. If you want to know more about the federal government’s spending activities, check out these articles: