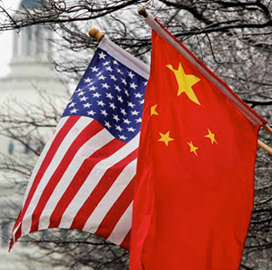 The Center for a New American Security has submitted to the Department of Defense a congressionally mandated study that sets principles for advancing U.S. strategy in the Indo-Pacific amid competition with China.

CNAS said Friday the independent study “Rising to the China Challenge: Renewing American Competitiveness in the Indo-Pacific” was mandated by the 2019 National Defense Authorization Act and offers approximately 100 policy recommendations across seven vectors of U.S. competitiveness.

"At a fundamental level, the China challenge is about us—it's about renewing American competitiveness," said Ely Ratner, executive vice president and director of studies at CNAS. "This requires a comprehensive strategy that bolsters U.S. advantages in economics, technology, diplomacy, defense, ideology, human capital, and more.”

CNAS CEO Richard Fontaine said the center plans to release a public version of the independent study in early 2020.