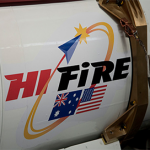 The U.S. Air Force has worked with Australia’s defense science and technology group to conduct a hypersonic flight test at the Woomera Test Range in South Australia.

She noted hypersonic flight is more than five times the speed of sound and has potential applications in air and space travel as well as military operations.

The HIFiRE team has worked to achieve program milestones such as design, assembly and pre-flight testing of hypersonic vehicles and design of avionics and flight systems, Payne added.

The flight test is last in the HIFiRE series and the two countries have begun to develop plans for the next set of flight experiments.

HIFiRE is a $54 million collaborative research program that seeks to explore the potential use of hypersonics for future aeronautical systems.