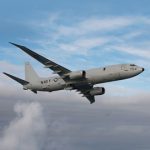 The governments of U.S., U.K. and Norway have agreed to establish a trilateral partnership on the operation of Boeing-built P-8A maritime patrol aircraft, Defense News reported Monday.

The Defense Department said the three countries have formed a statement of intent to create guiding principles for a trilateral P-8A coalition and lay down a framework “for further cooperation in areas such as readiness, enhancing defense capability and interoperability.”

A DoD official told Defense News that the partnership has not been finalized and that areas of cooperation could include operations in the North Atlantic, information sharing and co-location of maintenance and training assets.

The U.K. seeks to procure nine P-8A aircraft while Norway looks to buy five copies of the P-8A platform.

Bryan Clark, an analyst at the Center for Strategic and Budgetary Assessments, told USNI News the agreement could allow for sharing of airfields, maintenance facilities and equipment.