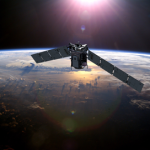 An instrument aboard a spacecraft that works to collect data on the Earth’s radiation budget and the upper atmosphere’s dynamics marked 15 years in orbit on Jan. 22.

Scientists and officials from NASA and Hampton University gathered Jan. 31 at Langley Research Center in Virginia to celebrate the 15th anniversary of the Sounding of the Atmosphere using Broadband Emission Radiometry instrument on the Thermosphere, Ionosphere, Mesosphere, Energetics and Dynamics spacecraft, NASA said Tuesday.

Langley and Hampton University oversee SABER, one of the four instruments on the TIMED space vehicle and built by Utah State University’s space dynamics laboratory.

“Fifteen years of SABER data has deepened our knowledge of the planet’s radiation budget — the balance between Earth’s incoming and outgoing energy,” Clayton Turner, NASA Langley’s deputy director, said at the event.

The SABER instrument has collected measurements of the mesosphere and lower thermosphere/ionosphere region and gathered data on the upper atmosphere’s carbon dioxide and nitric oxide emissions.

James Russell, SABER principal investigator and co-director of Hampton University’s center for atmospheric sciences, said the instrument has helped provide data on changes in water, carbon dioxide and other gases as well as the “coupling of high and low atmosphere.”