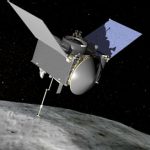 NASA is set to launch a spacecraft on Sept. 8 from Cape Canaveral Air Force Station in Florida in an effort to gather samples from asteroid Bennu and return the samples to Earth for scientific study.

The space agency said Thursday the Origins, Spectral Interpretation, Resource Identification, Security-Regolith Explorer is the third mission under its New Frontiers Program and will work to collect asteroid material that could help advance studies on the formation of planets, how life began and the potential impact of asteroids to the Earth.

NASA will launch the 4,650-pound OSIRIS-REx spacecraft onboard an Atlas V 411 rocket to begin a 34-day launch period that will eventually bring it to the asteroid within two years.

OSIRIS-REx will survey Bennu to determine promising sample sites upon arrival, collect between two to 70 ounces of surface material then return the samples to Earth in 2023 using a detachable capsule, NASA said.

Dante Lauretta, OSIRIS-REx principal investigator from the University of Arizona, said the launch of OSIRIS-REx will mark the beginning of a seven-year mission that seeks to collect samples from asteroid Bennu.

The Lockheed Martin-built spacecraft is equipped with five instruments designed for exploring the asteroid.

NASA noted that the OSIRIS-REx’s Touch-And-Go Sample Acquisition Mechanism and OSIRIS-REx Sample Return Capsule will support the collection and return of the asteroid samples.

The agency’s Goddard Space Flight Center will provide mission management, systems engineering as well as safety and mission assurance for the spacecraft.