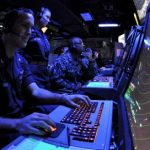 The former Navy Information Dominance Forces will now be known as the Naval Information Forces as part of an effort to align missions.

Rear Adm. Matthew Kohler, commander of the Naval Information Forces, announced the name change in January based on the adoption of the “information warfare” concept, the U.S. Navy said Tuesday.

“The name change is consistent with the naming conventions in place with the other type commanders and also reflects our efforts to further advance and ingrain information warfare readiness and capabilities across the fleet and Navy,” said Kohler.

The new name has been implemented in response to a document released by Chief of Naval Operations Adm. John Richardson that describes the Navy’s approach to coping with the security environment changes.