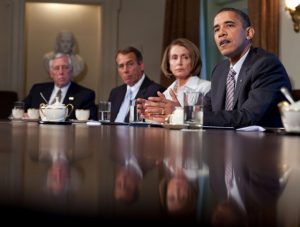 According to Richard Cowan’s report, this agreement came during the first meeting between Obama and top lawmakers from both parties since the election.

The Friday meeting represented the first time the president and the top legislators met in a room together and struck a similar chord, Cowan reports, and could also represent how future talks could go on averting the fiscal cliff.