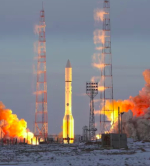 A RAND Corp. study has found that the commercial launch services industry may grow moderately over the next decade and the U.S. Air Force should establish a long-term plan for having two heavy-lift launch providers.

The RAND report, commissioned by the Air Force last year, states that the service must continue providing “tailored support” for U.S. heavy-lift launch service providers and prepare for having two providers in that market with a National Security Space certification through 2025.

The U.S. share of the global launch services market is likely to decrease over the next 10 years, with the nation unlikely to support more than one commercial heavy-lift launch provider. The Air Force’s current acquisition strategy is also “unlikely to provide sufficient supply of NSS launch vehicles” suitable for carrying U.S. national security payloads, the nonprofit organization noted.

According to the report, the Air Force can address this issue by enabling nonpriority access to aging launch systems and allowing U.S. companies to properly establish themselves in the launch services industry to support market feasibility efforts and mitigate additional foreign competitors.

Worldwide launch services increased from 47 in 1998 to 71 in 2018, with commercial services accounting for a steady rate of around 20 launches. SpaceX represents more than half of commercial launches to date, the report states.