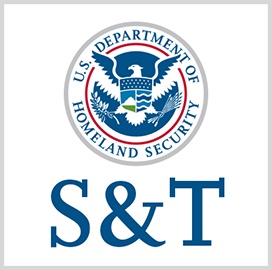 The Department of Homeland Security’s Science and Technology Directorate pursued an effort to help the U.S. Coast Guard boost the ergonomic quality of air-purifying respirators.

USCG’s Maritime Security Response Team sought S&T’s help to make APR masks more comfortable to use in chemical, biological, radiological and nuclear environments, DHS said Tuesday. MSRT works to deter and address acts of terrorism in maritime areas. Some of the group’s operations include the presence of CBRN hazards.

“To perform their job most effectively, they need to be outfitted with high quality personal protective equipment, such as a respiratory protective system that minimizes stress and exertion, while also protecting against a range of contaminants,” said Don Bansleben, S&T’s program manager for the effort.

S&T commenced PAPR studies in 2017 then partnered with CBC in 2019 for testing and evaluation in Chesapeake, Va. The directorate identified the wearable EZAir+ and MP-PAPR systems, products made by Avon Industries.

“S&T and the Coast Guard, with the help of the U.S. Army’s CBC in Edgewood, performed controlled lab testing to ensure that these systems are durable, reliable, simple to operate and that they’ll stand up in the environments that we would wear them in,” said Daniel Moose, technical director for MSRT East.

He noted that MSRT needed a system that makes breathing easier and reduces factors that negatively impact a user’s physiology. Results prompted the recommendation to purchase Avon Industries’ MP-PAPR system.

“We are hoping in the beginning of 2020 to begin fielding the new PAPRs to all our members,” Moose stated.