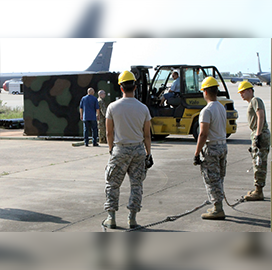 The squadron used the AN/TYQ-23A Tactical Air Operations Module from Tinker Air Force Base to command and control aircraft across the U.S., USAF said Sunday.

Tinker is among the four active-duty holders of the AN/TYQ-23A system across the Air Force. The technology is designed to facilitate a base's coordination with airborne units countrywide.

The squadron first received the technology in September and underwent usage training over a span of weeks.

“The fact that we are now able to run missions shows how we, the Control and Reporting Center community, continue to adapt and overcome to achieve mission success,” said Brian Zbydniewski, CRC systems integration technical advisor with the 752nd OSS.

The squadron now plans to hold two simulated missions with the new system weekly and two live ones monthly.