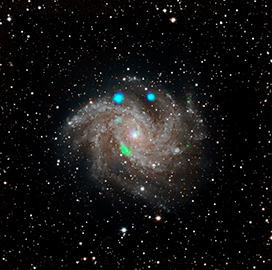 Officials from the U.S. and Chinese governments are planning to set a discussion meeting on civil space matters this year, Space News reported Monday. The next U.S.-China Civil Space Dialogue is planned for March and would follow the event's last iteration in 2017.

Matthew Rydin, press secretary and senior communications advisor at NASA, told SpaceNews the State Department is working on a list of topics that hold mutual interest between the two countries.  The State Department will co-chair the dialogue, as NASA does not have the authority to bilaterally engage with China state officials.

NASA's representation in the meeting would traditionally rely upon the space agency's associate administrator for international and interagency relations or the officer's deputy counterpart, Rydin noted.