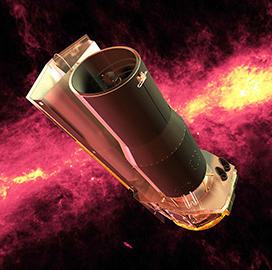 NASA has decommissioned its Lockheed Martin-built Spitzer Space Telescope after over 16 years of observatory operations.

The agency said Friday it launched Spitzer in 2003 and was able to study and discover asteroids, planetary collisions and the TRAPPIST-1 system of Earth-sized planets through the telescope.

The platform, operated by NASA’s Jet Propulsion Laboratory in Pasadena, Calif., is one of NASA's Great Observatories along with the Compton Gamma Ray Observatory, Chandra X-ray Observatory and Hubble Space Telescope. All of the data gathered through Spitzer are available for public access in a data archive, according to NASA.

"This Great Observatory has also identified some important and new questions and tantalizing objects for further study, mapping a path for future investigations to follow,” said Thomas Zurbuchen, associate administrator of the NASA Science Mission Directorate. “Its immense impact on science certainly will last well beyond the end of its mission."

NASA originally intended to conclude Spitzer’s operations in 2018 in preparation for the launch of the Northrop Grumman and Ball Aerospace-manufactured James Webb Telescope. The decommissioning was rescheduled to make room for further preparations for Webb’s launching, which is currently slated for 2021.